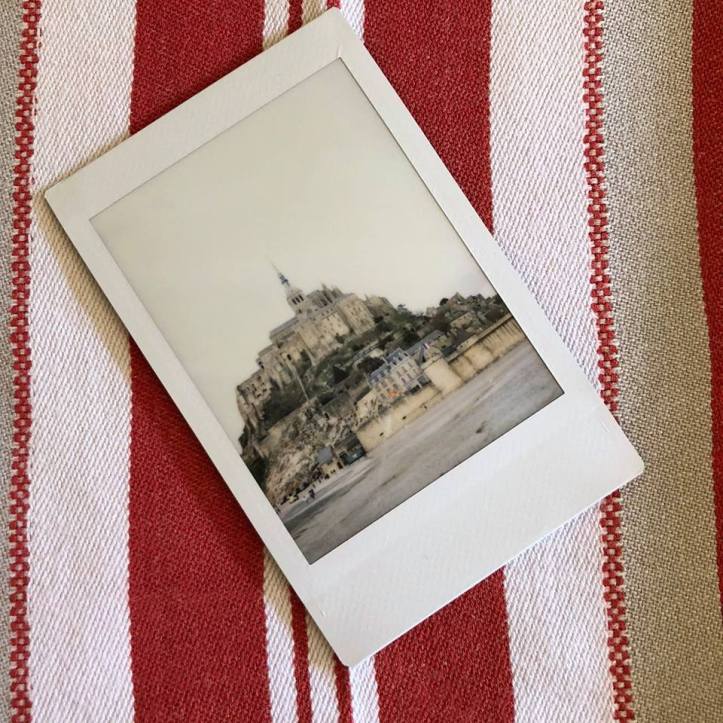 The gorgeous island of Le Mont Saint-Michel was on practically every single one of my French text books. It’s always been somewhere I wanted to visit – I find it fascinating that it’s a tidal island – during low tide you can walk out to the island. But when high tide comes in, it comes in EXTREMELY quickly, like a herd of galloping horses. If you’re on the tidal flats between the shore and the island when the tide comes in, you’re in very serious danger of being swept away, so checking the tidal tables for your visit has always been extremely important. In 2014, they opened a bridge between the shore and the island, so you can visit it safely at any time of day.

In 708 AD, Bishop Aubert of Avranches had a dream that the Archangel Michael told him to “build here and build high” so he started the monastery that is there today. The evolution of the island from a simple church to the giant Abbey is super interesting and detailed during the abbey tour.

We were in Paris for my mom’s 75th birthday celebration. My BFF Kristen lives in Amsterdam so she took the train to Paris Nord and we picked her up in a rental car (don’t use Avis) and drove west. Le Mont Saint-Michel is on the coast, exactly on the border between Brittany and Normandie. It’s actually been contested back and forth quite a few times.

We really wanted to stay at a fancy chateau. We picked Chateau d’Audrieu based off a recommendation from my Parisian Godmother, and because it was mostly on the way. If I was to do this trip again, I would most certainly want to stay at this chateau again, but I’d also like to be around Le Mont Saint-Michel after the press of tourists is over. You could either stay on the island itself (which reportedly has NOTHING going on after hours, which could also be quite nice) or across the bridge in the tourist town of La Caserne (which also likely has nothing going on later either). The chateau and the nearby area is in the Calvados region, eponymous of the famous apple brandy, so be sure to try some while you are there!

We were one of two rooms that were booked into the Chateau d’Audrieu because they had recently finished a renovation and luckily people hadn’t caught on yet! We were the only guests at dinner! The castle and the grounds were stunning. We spent the afternoon after our arrival walking around the grounds, visiting their mules (Eating baguettes! Très Français!). We walked the short distance down the road to the church, which was closed, and they had a really cool cemetery to look around in. When we were walking back we noticed there was a plaque about Canadian WWII casualties, and didn’t think much of it. Then later, I was googling the chateau to send the link to someone and it autofilled to “Chateau d’Audrieu massacre” and it turns out the Nazis had encamped at the chateau and they killed 45 Canadian POWs. Quite the sinister history! Despite that, the hotel and the updates were posh and gorgeous. Loved every room, I felt like we were in an episode of the French version of Downton Abbey. Hanging out in the bar was fun, even though it was just us, and dinner was INCREDIBLE – we did the full tasting menu and they brought a special desert for my mom with a chocolate banner wishing her a happy birthday. Breakfast was quite nice as well. However – as you would expect from a Relais Chateaux property, everything was quite expensive.

When you’re driving there it’s impossible to miss, the countryside is flat and it’s a giant mountain with a big church on the horizon. We used the Rick Steves France Book (what do you know, Mont St Michael is on the cover!) and it was super helpful with directions and knowing how to park and get around. One thing to note – there isn’t a lot of evident gas near La Caserne and we were in desperate need. Fill up early before you get off the main highway. We parked, took the easy shuttle to the island over the new bridge, and walked on up.

On the island, there’s a steep walkway to get up to the abbey. It’s a one-way kinda deal, crushed with tons of tourists. We took it slow and stopped for all sorts of photos. It was a little difficult on my mom to walk up, and when we realized how many stairs the whole tour would include, she decided to hang out at a café with her book. What a bummer to miss the end!

The Abbey itself was awesome. The cloisters were probably my favorite part. We followed along with Rick Steves’ guide and it was super helpful to learn the history of the place. I am so thankful that I got to see the inside, but for me, the real best part was the view from outside.

Shopping was lots of touristy knick knacks that you don’t need. I bought a post card. For food, we stopped at the famous La Mere Poulard on the way out. It is a must do – if you’re going during a meal time, you can make a reservation. It’s right at the entrance to the island, it would be super easy to make a reservation, go do your tour, and then come back and eat. There was so much food. They are famous for their omelettes, which is deserved. They whip the eggs to this awesome rhythm and the omelette was probably the fluffiest, lightest, most amazing one I have ever had! (I have a video of the omelette whipping but I have the cheap WordPress so I can’t upload it apparently)

If you want to hear more about the rest of my trip – click here to read about our time and food in Paris before/after our time at Audrieu and Mont St Michael!